The Nagas are a group of tribal people inhabit in the north western Myanmar bordering with Indian state of Nagaland. The numerous Naga languages belong in the Tibeto-Burman language group of the Sino-Tibetan language family, tribally organized, with a strong warrior tradition. Their villages are sited on hilltops and till the later part of the 19th century, they make frequent armed raids on the plains below. Although the tribes do not form a homogeneous group considering the diversity in their language and traditions, they have many similarities in their culture which set them apart from the neighbour elsewhere in the area.

The Nagas have an egalitarian society, and the village is a closely knit unit consisting of households of different clans. An Indo-Asiatic people, form more than 20 tribes, as well as numerous subtribes, and each one has a specific geographic distribution. Though they share many cultural traits, the tribes have maintained a high degree of isolation and lack cohesion as a single people. The Konyaks are the largest tribe, followed by the Aos, Tangkhuls, Semas, and Angamis. Other tribes include the Lothas, Sangtams, Phoms, Changs, Khiemnungams, Yimchungres, Zeliangs, Chakhesangs (Chokri), and Rengmas.

The village is a well-defined entity with distinct land demarcation from neighbouring villages. Each has a dialect of its own and as such there is a strong sense of social solidarity within it. The people in it are held together by social, economic, political and ritual ties. The villages have their own identity but not in isolation as there are interdependent relationships with neighbouring villages. The family is the basic unit of the Naga society. Marriages are usually monogamous and fidelity to the spouse is considered a high virtue. Marriage within the same clan is not permitted and it amount to incest. Incestuous couples are ostracized from the villages. The family is the most important institution of social education and social control.

The Nagas are expert craftsmen. Their dwellings are made of wood and straw and these are ornately carved and arranged. Each tribe has a unique way of constructing their huts. A common thing about all the tribes is that they decorate the entrances of their dwellings with heads of buffaloes. The Nagas love colour and this is evident in their colour fully designs shawls and headgears. Here again, the designs on the costumes are unique to each tribe. The various craftwork done by the Nagas include basketry, weaving, wood carving, pottery, metal work jewelry and beadwork. Weaving of colorful woolen and cotton shawls is a central activity for women of all Naga tribes. Among many tribes the design of the shawl denotes the social status of the wearer.

Folk songs and dances are essential ingredients of the traditional Naga culture. The oral tradition is kept alive through the media of folk tales and songs, Naga folk’s songs are both romantic and historical, with songs narrating entire stories of famous ancestors and incidents. There are also seasonal songs which describe various activities done in a particular agricultural season. The early western missionaries opposed the use of folk songs by Naga Christians as they are perceived to be associated with spirit worship, war and immorality. Folk dances of the Nagas are mostly performed in groups in synchronized fashion by both men and women depending on the type of the dance. Dances are usually performed in festivals and religious occasions. War dances are performed mostly by men and athletic and martial.

Apart from the shawl, the normal working dress is a kilt which is generally of black color. It may be embroidered with cowries. The cowries are rubbed on stone before being embroidered so that they may stick well, and they are always sewn by the man using the cloth and never by his wife or anybody else. The cowrie decoration is quite popular among the Naga and it imparts to the kilt the character of toga virility, signifying his success in love or war.
Another prominent thing for Naga man attire is the headgears. Naga headgears are not a simple hat or helmet. These headgears are a symbol of position, status and power. No one can just simply wear any headgears; they are inherited or worn after having earned some achievement. The head of each group in a village wears special types of headgear decorated with hornbill bird’s beak, boar tusks and feathers, animal skulls which symbolizes power, authority of the head of the group.

There are different types of headgears. Animal Skull headgears (leopard, Monkey). They are symbolic of their wearer’s bravery as head hunters. According to Naga belief, the human soul is divided into two parts; Yaha (the animal aspect) and Moi (the spiritual aspect). When a Naga dies, the Yaha travels to the land of the dead while the Moi remains in the village. An abundance of Moa is considered beneficial to the prosperity and fertility of the Naga tribe and the crops they grow. In the ancient times, the Naga believed the Moi resided in the headgears.

Cane helmets and hat frames are also made. Most of the ceremonial headgears are made of cane and are further decorated with dyed goat fur, boar tusks, etc. Hornbill bird’s beak or feather headgears Hornbill is very a rare bird. The number of hornbill feathers used on the headgears is like medals of the wearer achievements. The Naga man has to achieve success in order to claim the number of feathers used on his headgear

The women of Nagaland are mostly found wearing a plain black, blue and white cloth with different breadth of black marginal bands. Some Naga tribal ladies wear small conical caps, made of cane. The more visitors drawn and attracted to Naga New Year festival because they want to enjoy the daily life of this unique tribal community. Visitor can see all tribes of Naga at one place. Local foods and wines are in abundance. 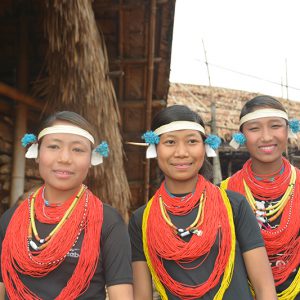