In early April, the Naga Hills of Myanmar and northeastern Nagaland of India come alive as the Konyak Naga tribe celebrates their most important festival, known as the “Aoling”.
The Konyak tribe is best known for their elaborate tattoos, fierce headhunting prowess and tight-knit fiefdoms ruled mostly by kings known as Angh. These small realms that crisscross the invisible international boundary between India and Myanmar were once the core of traditional Konyak life. Today many of these realms still exist, although the power of the Angh has been greatly diminished by the advent of the modern states of Myanmar and India.
Like many of the Naga tribes who inhabit India’s northeastern states of Nagaland, Manipur, Assam and Arunachal Pradesh, and north-western Myanmar, the Konyak have their own as well as traditions and separate festivals. The Aoling is steeped in Konyak animist traditions that predate the arrival of Christian missionaries. The festival is usually celebrated in the first week of April and last for six days. Konyak Naga from both sides of the Indo-Myanmar border come together to celebrate.
The Aoling is the celebration of a divine spirit named Wangwan. Coinciding with the arrival of spring, it is also an opportunity to pray for a good upcoming harvest. The Konyak invoke Wangwan’s presence by praising the spirit while singing, dancing, eating, drinking and playing a traditional log drum. The Konyak decorate their traditional youth dormitory and educational center, known as Morung, with bamboo branches and palm leaves symbolizing Wangwan.
Each day of the festival is divided into its own activities. The first day, known as Hoi Lah Nyih, is a preparation day reserved for collecting firewood and preparing food, especially rice beer. Ritual sacrifices of livestock for prognostication also take place. During the next two days, named Yin Mok Pho Nyih and Mok Shek Nyih, domesticated animals are gathered for slaughter.
Lingnyu Nyih, the fourth day of the festival, is often the liveliest. It is a time when both men and women wear jewelry mad from animal bones, deer antlers and finely embroidered traditional outfits. The men and women come together to sing and dance but they never dance together. Instead, the men perform warrior dances with spears and guns, while the women dance amongst themselves supporting the men’s ritualistic performance.
The final two days of the Aoling, Lingha Nyih and Lingshan Nyih, are a time for families, friends, and villages to come together to celebrate the living and bid farewell to those souls who have departed over the past year. It is also a time for those who seek a new beginning to make peace with their enemies and reconcile strained relationships.
Visitors who come to observe the Aoling are warmly welcomed and are immediately taken in by the enchanting sights and sounds. But the most intriguing sight for visitors has to be the Konyak warriors’ traditional facial tattoos. These badges of honor were earned when a Konyak warrior took the head of their enemy in battle. Although the practice of headhunting died out in the early 1970s when the Konyak converted to Christianity, many older members of the community still display their tattoos with pride.
One of the best places to observe the festival is in the town of Mon, in India’s Nagaland, which hosts one of the biggest Aoling celebrations. However, for an authentic Aoling experience it is best to try and visit a Konyak village in Myanmar. The Konyak villages in Myanmar rarely receive visitors from the outside world and you can be sure to have a unique Aoling celebration. 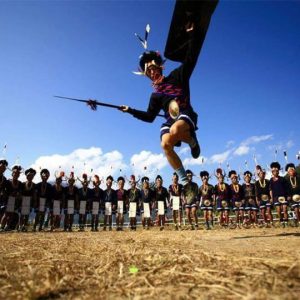